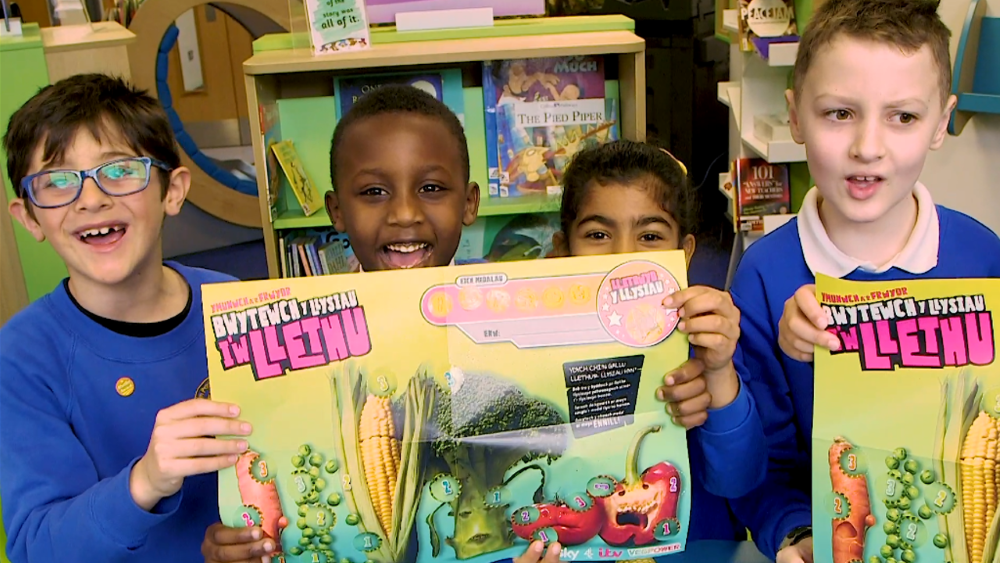 Veg Power’s main aim is to increase veg consumption across the UK – an initiative that was founded in 2018 having developed from the work of Peas Please.  Food Sense Wales works closely with Veg Power to support its activity in Wales.

Currently in the UK 80% of our children are not eating enough vegetables, with a third eating less than one portion a day and only a third of adults achieving the 5-a-day target. Veg Power works in close partnership with Peas Please and aims to use advertising and marketing to increase consumer demand and perceived value of vegetables.

In 2018, Veg Power formed a key partnership with ITV and together created the Eat Them to Defeat Them campaign, which was first delivered in 2019, making veg fun for kids.  In 2020 ITV and Veg Power were joined by Channel 4 & Sky for a bigger second advertising campaign and the launch of the campaign schools’ programme. The campaign also ran this year reaching an even greater audience and running its largest ever schools programme for 470,000 children across the UK.

During each of the Eat Them to Defeat Them campaigns, Food Sense Wales has helped to facilitate considerable support from Welsh Government, Welsh Local Government Association as well as various local authority areas to deliver activities in Wales.  With the generous support of Castell Howell – during the 2019, 2020 and 2021 campaigns – bilingual resources were distributed to primary schools across Wales. In 2021 we extended the programme to 165 schools in 16 local authorities reaching 29,878 pupils.

The 2020 School Report noted that in Wales, 66% of children agreed that the campaign made eating veg seem more fun and that 57% of children agreed that they’d eaten more veg than usual at home in the weeks following the activities – with Wales respondents being more positive than the UK average. In our 2021 survey of parents in participating Welsh schools 42% reported that their child had learned new Welsh vocabulary from the campaign (up from 16% In 2020).