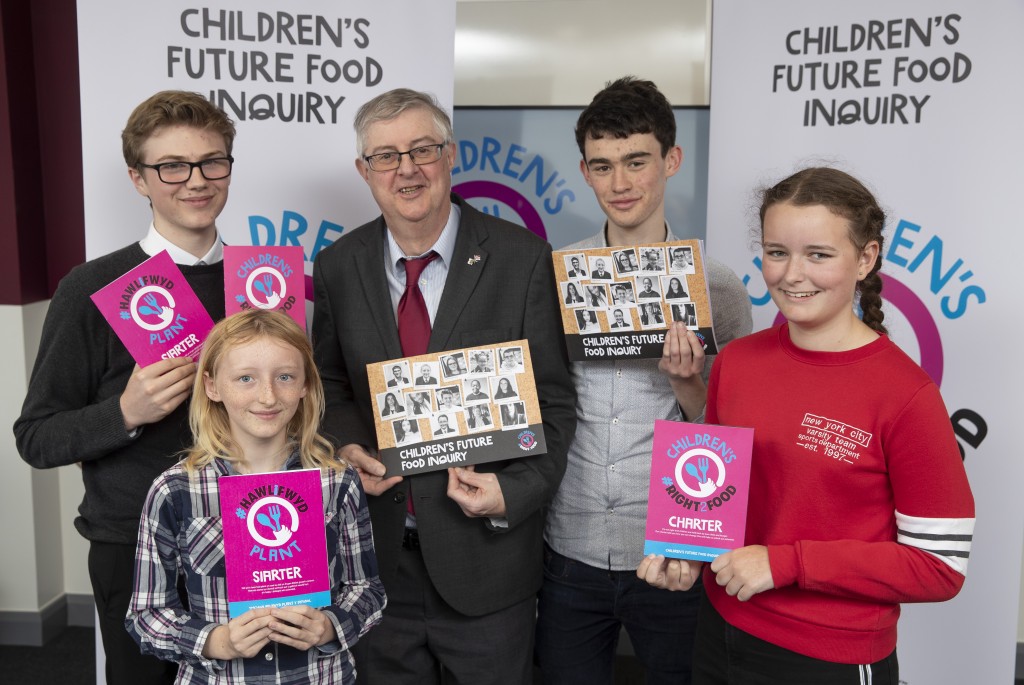 The Children’s Right2Food Campaign is a nationwide initiative that was set up to ensure that every child in the UK can access and afford good food.  It was shaped by the findings of the Children’s Future Food Inquiry that was led by Young Food Ambassadors from across the UK and coordinated by the Food Foundation.

Launched in 2018, the Children’s Future Food Inquiry was the first attempt to speak directly and systematically to children, young people and those who live and work with them about children’s experience of food and how it affects their lives. The Inquiry was spearheaded by a cross-party parliamentary committee and supported by partners in each of the devolved nations: Food Sense Wales, Children in Wales, Children in Scotland and Children in Northern Ireland.

This Inquiry established that there are 160 000 children living in Wales who are unable to afford the Government recommended diet. An initial report was subsequently published, entitled “What young people say about food”  which featured a series of recommendations.  In Wales, in May 2019, Food Sense Wales, along with the Young Food Ambassadors from Prestatyn High School, presented the Inquiry’s findings and their Children’s Right2Food Charter to the First Minister. This outlined a plan to tackle children’s food insecurity and protect every child’s right to food through targeted policies.

The Covid-19 pandemic has plunged millions of children further into food insecurity, many of whom were already struggling to secure a decent diet.  Given the scale of the challenge and the importance of children’s health and diet, the provisions set out in the Children’s Right2Food Charter have been updated to provide an evidence-based road map for the government to ensure that every child has access to a healthy diet. The Charter is accompanied by a new briefing , supported by Food Sense Wales, which points to areas where policy across all four UK nations needs urgent attention.

The Charter also informs the work of the End Child Food Poverty Task Force – a coalition of businesses and charities spearheaded by footballer Marcus Rashford.

Food Sense Wales continues to support the work of the Children’s Right to Food campaign in a UK context and to influence and advocate Welsh Government regarding the need to implement changes to policy that will ensure children in Wales are given the best possible start in life in conjunction with the Wales Antipoverty Coalition.